Have a try or die? Advertising lessons in Chinese numerology

In Chinese culture certain numbers such as 6 or 8 are widely believed to be auspicious or lucky while others are considered unlucky. The pronunciation of the number 4 in Mandarin for example is similar to the word for death and thus the number is considered unlucky and avoided when and wherever possible. The unluckiest number of all however is 14, which sounds similar to “going to die” or “you will die”. The belief in numerology traditionally is so deeply engrained that even today many buildings do not have a 4th or 14th floor, nor do most domestic planes have rows with such numbers.

So why on earth would anyone dare to introduce and advertise a new cigarette brand in China called “414 Cigarettes” in the 1940s!? Surely it must have been an ignorant American company, clueless about Chinese traditions and customs. The claim “America’s most refreshing cigarette” on the packaging, certainly points towards that suspicion and even more certainly a product with such an ominous name couldn’t have lasted long in China.

Surprisingly nothing could be further from the truth, as “414 Cigarettes” were in fact created in 1947 by Z. Yuen Tobacco Manufacturers (瑞源烟廠 or Ruiyuan Tobacco Factory) - a Chinese company from Shanghai. Additionally, and despite all numerological odds, the brand was actually sold in China for well over 50 years. How is that possible?

Firstly, for Chinese readers, the advertisement poster has a hint printed on it in the form of a call-to-action exclaiming “請君試一試”, meaning “please give it a try”. 414 is in fact a homophone for “shi yi shi”, translating to “to try”. That alone though doesn’t explain the full backstory and why Ruiyuan’s owner Shi Chengfeng (施成丰) was so daring to use the unluckiest of numbers in his newly created cigarettes brand name.

The answer lies in the fact, that the brand name “414” was essentially already created some 7 years earlier and popularized by the most well-known towel manufacturer of East China: Shanghai Cuizhong Towel General Factory (上海萃众毛巾总厂), founded in 1937. Their famous “414” brand combined with the bell brand logo was launched in 1940 to encourage consumers “to try” its superior quality. The trademark was formally registered in the towel and fabrics category in the National Trademark Registry in 1941.

During the tumultuous time after the Second World War but before the Communist liberation in 1949, Shi Chengfeng took his chance to get away with using the “414” brand in a category other than it was originally registered in but still capitalize off its popularity for his small tobacco factory with around 100 employees.

The strategy turned out to be successful, at least until after the liberation when all tobacco producers were eventually nationalized. A state-owned enterprise from Jiangsu province, Xuzhou cigarette factory (国营徐州卷烟厂), became the new trademark owner and continued to produce “414” brand cigarettes until 2003 when it was merged into Jiangsu China Tobacco Industry Co., Ltd. (江苏中烟工业有限责任公司公) which ultimately went public in 2009. Not a bad run for a brand with apparently such an unlucky name!

Now, you might wonder what happened to the Cuizhong Towel General Factory and we are happy to report that the original creator of “414” was even luckier and actually outlived its former cigarette copycat. The company continues to produce, market and sell towels under the supposedly inauspicious brand name until this day. Even the company’s website URL is www.414mj.com (mj standing or maojin, meaning towel).

Lastly the iconic brand also continues to live on even in modern art installations such as below, spotted recently at the Shanghai M50 creative park: 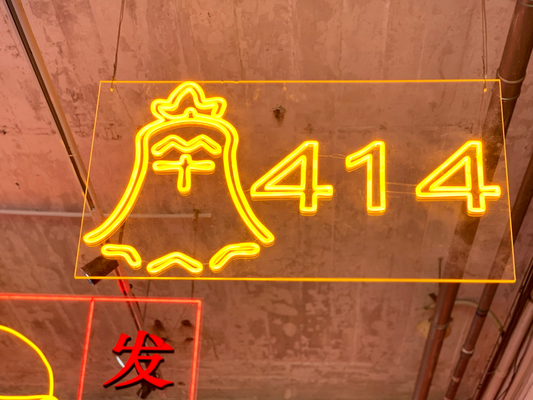 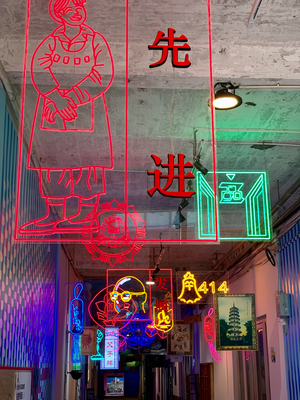