Printing Blocks, Battleships & Batteries – how a fearless Chinese brand beat its biggest American competitor, just to eventually be crushed by a White Elephant… 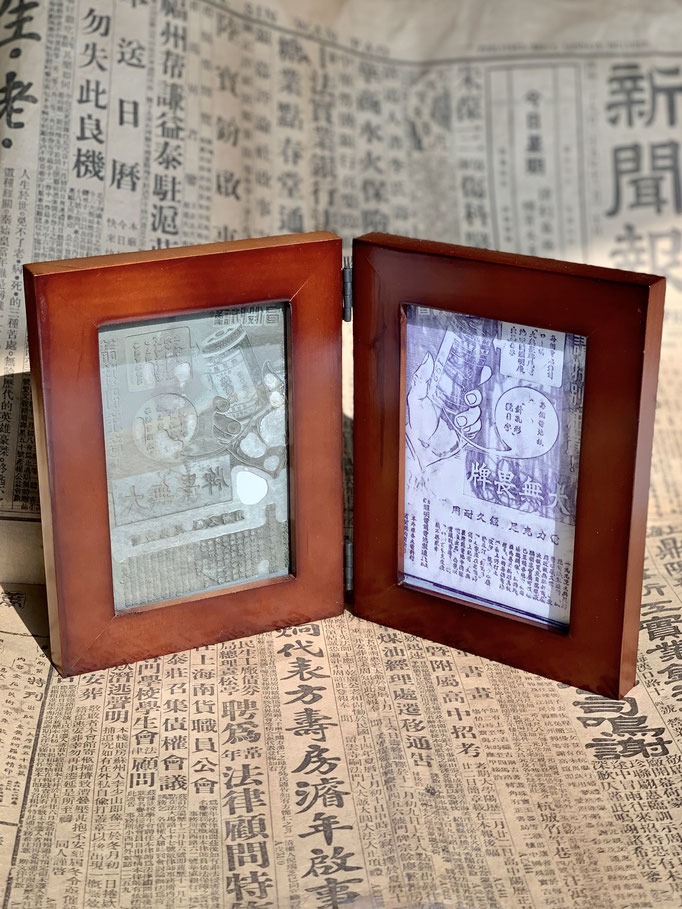 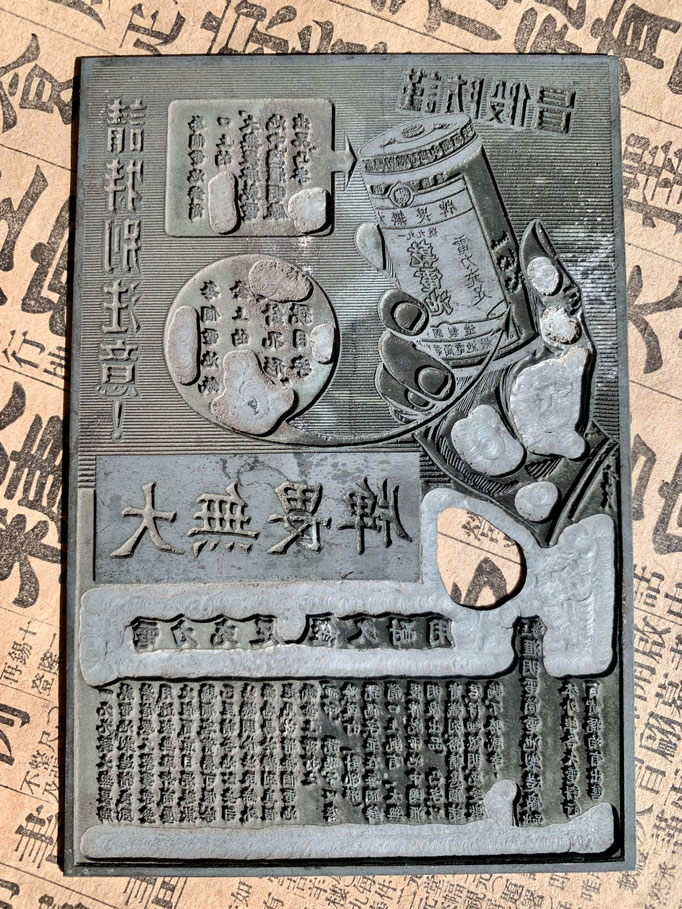 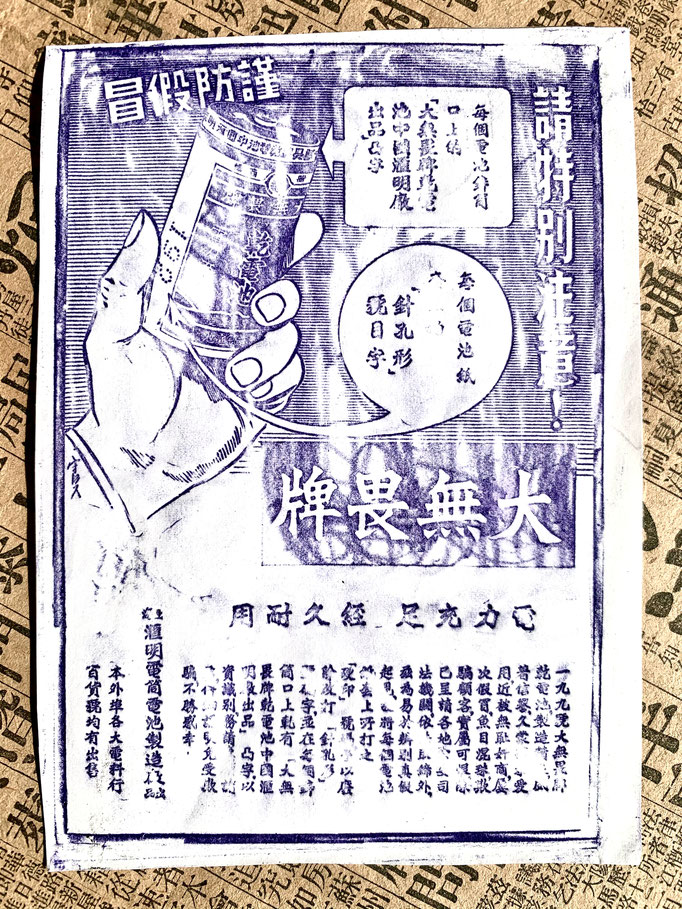 We’ve all learned how in the 1440s Gutenberg invented the movable-type printing press and how Tang Dynasty China already used woodblock printing in the 8th century. This 1940s letterpress printing plate, however teaches us not only about the history of mass media advertising but tells the story of another even more complex new technology: portable electricity.

For centuries images were carved into letterpress blocks and plates, first manually then eventually etched in magnesium blocks with a nitric acid solution. The technology was used in China well into the 1950s and especially in newspaper production until it was eventually replaced with offset printing.

Our exhibit is a typical example on how a print advert was first chemically etched based on the artist’s design and some of the parts then manually milled – in this case for “Great Dreadnaught” (大无畏牌) batteries.

What sticks out from the actual ad copy is that its prime concern is warning consumers about counterfeits and educating them on the superior quality of its batteries over other manufacturers.

Great Dreadnaught, in case you were wondering, was the name of a battleship equipped with large guns of the same caliber. It was named after the HMS Dreadnought, which set sail in 1906. However, the word goes back to the late 17th century when it meant a fearless person (who dreaded naught — nothing), literally one who "fears nothing" and identical to the meaning of the Chinese brand term pronounced “dawuwei”.

If his all sounds a little confusing and unrelated to Chinese advertising and commercial history, dread not – we’ve got it all researched & written up for you!

“Kerosene oil came in to cut down the sale of candles. Now batteries for electric torches are offering strong competition to kerosene and have created such a vogue in peripatetic illumination that the formerly huge business in storm lanterns is practically dead (…) The electric torch is one of the most recent articles of foreign manufacture to become generally popular in China, and there is a very large sale for the small electric batteries which go with the torch.”

On January 10, 1899, David Misell, the inventor of a tubular hand-held "electric device" (aka flashlight), assigned his invention over to the American Electrical Novelty and Manufacturing Company owned by Conrad Hubert. In 1905, Hubert changed the name to The American Ever Ready Company, selling flashlights and batteries under the trademark Ever Ready.

In 1914, The American Ever Ready Company became part of National Carbon Company and the EVEREADY® battery brand began to expand across the globe incl. to the Far East.

In China Eveready (under the Chinese brand term 永备牌) would soon create a quasi-monopoly for flashlight batteries and dominate the market.

National Export Advertising Services, Inc from New York represented them – in cooperation with C.P. Ling’s China Commercial Advertising Agency in Shanghai but the brand also worked with the BAT inhouse design agency and used a BAT affiliated printing company for their famous calendar posters that were ever-present across China.

The business model was of course to provide free or cheap mass-produced flashlights as promotional merchandise but then have users locked-up in a life-time need to replenish batteries.

By 1924 reportedly over 30 smaller-scale domestic factories were in operation around Shanghai alone, attempting to replicate the quality and durability of Eveready. The earliest of them was the owner of the White Elephant brand (白象牌) called Shanghai Tong Ming (then called 上海通明, now 上海白象天鹅电池有限公司), established in 1921, followed by Tai Hang-yuen, the Waite Battery Company, the Central Carbon Company and – the most notorious of all – the Wei Ming Battery Company (汇明电筒电池厂) founded in 1925.

By the late 1920s and throughout the early 1930s copy-cat brands and imitations of Eveready batteries had become a serious threat for the company. During a 5-year period the English language newspapers reported over 20 (!) cases and lawsuits pursued by Eveready.

The North-China Herald on October 20th 1928 for example writes: “The Wei Ming Battery Company was alleged to have gone even farther and after dressing their product much after the fashion of the “Eveready” battery, called it the “Everbady”.

Counterfeits by other copy-cat manufacturers were sold under names such as Everlight, Everybody, Evernight, Evertime, Everealy and Everbaby. All more or less with the same distinct design with blue and red label colors of the original and iconic Eveready brand identity.

As such Wei Ming not only had to deal with the original Eveready creator, but also with countless copies of their copy, explaining the efforts in our printing block advert about “counterfeit prevention”, emphasizing the powerful long-lasting properties, the one-year warranty and the warning to not purchase imitations by inferior manufacturers. 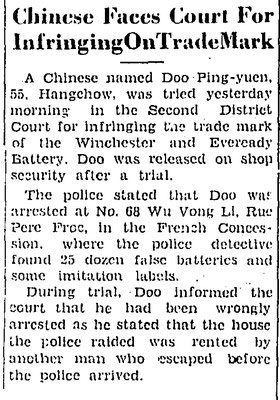 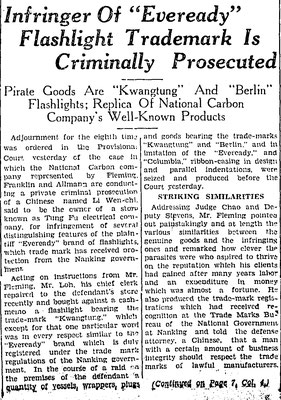 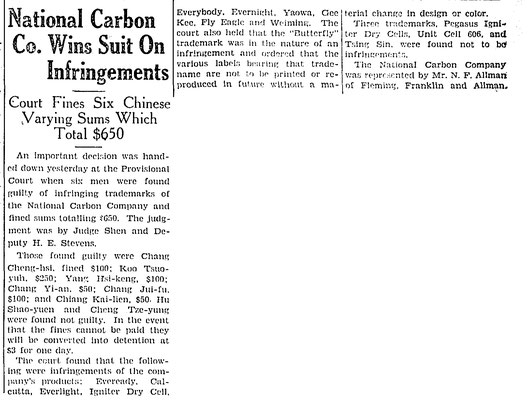 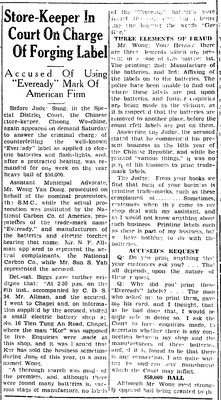 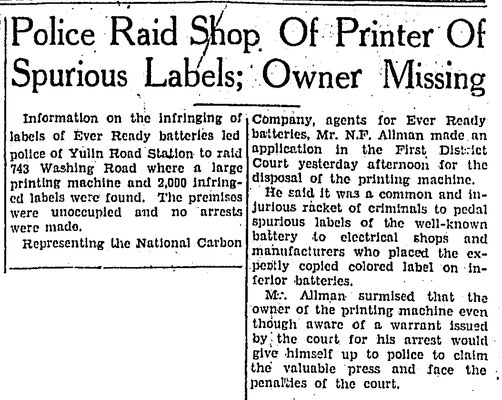 Wei Ming was started by Mr. Ting Hsiung-Chao (丁熊照), son of a poor family from Huaqi Village (华圻村) in Jiangsu province. In the early days, his Shanghai factory only leased two residential houses with a total of six workers to produce batteries under the “Chicken” brand (鸡牌). Eveready at that time had a massive factory established in Shanghai, with the most advanced equipment, very strict procedures and confidentiality measures. All the high-quality raw materials were imported from the United States, making Eveready about 3x more expensive than domestic manufacturers but also far superior in terms of durability and overall quality.

Mr. Ting sent some of his most skilled workers to seek employment at the Shanghai Eveready plant during the day, while in the evening returning to the Wei Ming factory working to replicate the superior technology of the American competitor. After gaining all necessary know-how and restructuring the business in 1929 Ting Hsiung-Chao secured significant funding to expand his previously small operation. The entrepreneur also felt that the "Chicken" brand was no longer representative of his business ambitions (neither probably was "Everbady" still an option...) and instead decided to rebrand his batteries to the 大无畏牌 “Fearless” brand in Chinese and “Great Dreadnaught” in English.

The new factory building had more than 10,000 square meters in size with the latest machinery and equipment for now more than 500 workers. In 1931 Mr. Ting merged the company with the Yongming Flashlight Factory (永明电筒厂), which he had also founded in 1929.

By 1935, the daily output of the now combined Wei Ming Flash-Light & Battery Works had reached 7,000 dozen of dry cells and 800 dozen of torches, making it the number 1 domestic producer. The company also started an export business to among others the Philippines, Singapore, South America, Africa and other countries across Southeast Asia.

Shortly before the Communist liberation of Shanghai Mr. Ting moved to Hong Kong in 1948 where he setup the Kader Holdings Company Limited (开达实业公司), producing plastic toys. In addition, he eventually founded more than 10 other enterprises in the British Colony including the Mindex Battery Works, Ltd. (明达电池厂). He retired in the late 1960s and published his autobiography "Truth and Facts: Recollections of a Hongkong Industrialist" in 1974. Mr. Ting Hsiung-Chao passed away on November 1, 1976 at the age of 73.

His company Wei Ming back in Mainland China entered into a public-private partnership together with its competitor Tong Ming (White Elephant) and one other formerly private manufacturer in 1956 (jointly now called Shanghai Battery Factory 上海电池厂) and thereafter did not continue the “Great Dreadnaught” brand. In July 1979 both the "Fearless" and “White Elephant” battery brands were revived and put under the production of the Shanghai No. 2 Battery Factory.

This company continues sell batteries today under the “大无畏” brand (in English now called “Dauntless”) together with the White Elephant logo, making it one of the iconic and almost 100 years long lasting domestic “old Shanghai” brands.

Across the pond in the US, Eveready Battery Company, Inc, after several ownership changes was listed on the New York Stock Exchange in the year 2000 as a holding company, and as part of Energizer Holdings, represents its most important daughter company. The company's current US production facilities for batteries and battery parts are located across the country but the majority of its batteries are made in China. The Eveready brand also continues to be sold in Mainland China.

All things considered, surprisingly little has changed in almost 100 years - both in terms of dry cell battery technology as well as the close to a century old rivalry of two emblematic battery brands. At least printing plates no longer have to be carved by hand and the war for Chinese consumers hearts & minds is primarily fought online...