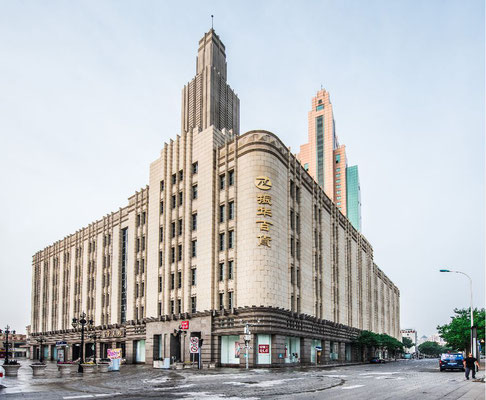 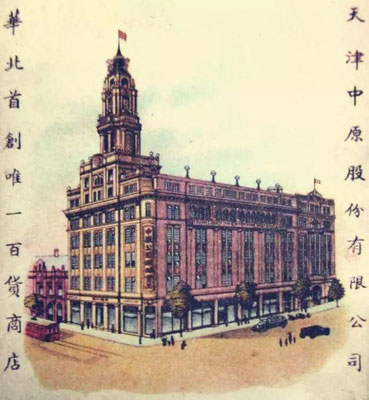 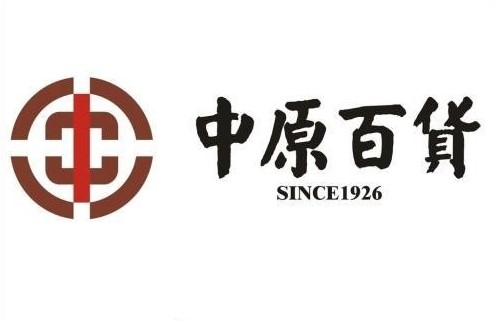 Much has been written about old Shanghai’s famous temples of consumption such as the Sincere Co. opened in 1917 and the Wing-on established one year later in 1918. Little though is known about Tianjins (then called Tientsin) commercial retail history, even though it then was the second largest treaty port of China in terms of international population with up to 9 foreign concessions.

When a third Shanghai department store – the Sun Sun – opened in 1926, three colleagues from the Sincere Co, C.H. Lam (林紫垣), S.T. Lam (林寿田) and M.H. Wong (黄文谦) decided their time had come to capitalize on their combined decades long experience and launch their own retail empire. C.H. Lam born in Zhongshan, Guangdong was Sincere Co’s procurement manager for Japanese goods in Shanghai, S.T. Lam and M.H. Wong were deputy manager and head of the jewelry department of Sincere Co Hong Kong respectively. Additional coworkers from Sincere who joined the endeavor were Rong Yuangang (容原刚), He Jianian (何嘉年), former Shanghai director Chen Junhai (陈军海) and former Shanghai secretary He Yizhou (何逸州). After initially considering Shanghai, they decided on the “blue ocean” of Tientsin – still lacking a modern large-scale department store besides smaller markets such as the Tianxiang (天祥市场) and the Taikang (泰康市场) malls. The founders additionally brought on J.S. Lam (蓝赞襄), previously comprador at the Kobe HSBC bank, as Managing Director and set out to raise funds. Financiers not only included "wealthy businessmen from the South" as the press reported, but also the obligatory northern warlord – in this case Ch’en Kuang-Yuan (陈光远).

The name “Zhongyuan”, meaning Central Plains, refers to the lower and middle reaches of the Yellow River - the birthplace of Chinese civilization.

Just like their eventual main competitor Gao Xingqiao (高星桥), who at the very same moment was in the process of planning his Industrial Bazaar (天津劝业场 “Quanyechang” in Chinese), the enterprise first considered a location in the Tientsin French Concession. Ironically, rumors of the Shanghai Sincere Co planning to build a department store in the French part of the city, triggered an increase in property prices and Chung Yuen was forced to consider other options.

Ultimately, the Japanese Consulate General of Tianjin, eager to attract more businesses, offered a favorable alternative and the department store was built on Asahi Road in the Japanese Concession. The location had previously been the site of a smaller market titled the Japanese "Industrial Bazaar" (not to be confused with the aforementioned Quanyechang Industrial Bazaar), as a 1915 guide by the Imperial Japanese Government Railways reveals.

The eclectic neo-gothic building of the Chung Yuen was planned by the architecture firm Kwan, Chu and Yang Architects (基泰工程公司) and erected in a record time of less than a year by the Xintai Construction Company (鑫泰营造厂). With initially 5 stories and 30 meters tall, it covered an area of 9,164 square meters. The spire reached a height of 66 meters, making it the tallest building in Tianjin at the time. Kwan, Chu and Yang 10 years later would also be the architects of the Da Sun (mostly referred to just as "The Sun"), in Shanghai - another record breaking department store building.

Eleven months ahead of its competitor the Quanyechang Industrial Bazaar, Chung Yuen Co. opened on January 1st 1928. The former President of the First Republic of China Li Yuanhong (黎元洪), who had retired in Tientsin, cut the ribbon to unveil the new building. The “large department store of American type” gathered widespread attention in Chinese and international newspapers. The Chinese trade Journal Business Monthly (商业月报), compared it to the great Western department stores such as the Marshall Field's in Chicago or the Printemps in Paris. "The initial capital raised was 1.5mil dollars and the whole staff comprises of some 500 members”, Women’s Wear Daily from New York reported. The China Press added “The principal object of the establishment was to help distribute native goods and to order goods from foreign countries direct, so that the public may get supplies at a lower price and find all they need at one place.”

In the summer of its opening year the "Seventh Heaven" roof garden dance hall was opened and over time additional floors with further amenities added. The new sixth floor for example was equipped with Japanese restaurants while the fifth floor featured a cinema, a barber shop, a pool hall, a photo studio and a tailoring store.

Chung Yuens business was flourishing, until the Mukden Incident in 1931 caused a first major crisis for the company, which was predominately selling Japanese products. With the anti-Japanese patriotic movement on the rise, Chung Yuen became deserted almost overnight. Eventually the Japanese Concession police stepped in and occupied the vacant third and fourth floors of the building, apparently even transforming parts of it into a prison. To save operations Chung Yuen had no choice but to open a second Tientsin branch in the French Concession on Rue du Maréchal Foch (now Binjiang Road) in 1932, which by this time had become the uncontested commercial center of the city:

In 1943, the French administration declared that, before its concession was given up, there were more than 4,000 licensed stores in the settlement. Out of these more than 600 stores were located in the three main shopping malls, Quanye, Tianxiang and Taikang. In contrast, although foreign firms’ offices were mostly concentrated in the British Concession, there were no major consumer stores besides a smaller branch of the Shanghai Hall & Holtz department store opened in 1897, Jaques & Co. established in 1901, the E. Lee general store as well as a Whiteaway, Laidlaw & Co subsidiary, all on Victoria Road.

The French Concession branch saved Chung Yuan and business once more set new sales records. So much that it eventually opened an additional subsidiary in 1934 on Wangfujing Street in Beijing.

But soon disaster struck again when in 1939, the Tientsin flood devastated both Chung Yuen locations which were partially under water for over two months. At around the same time, a fire broke out at the Beijing branch and destroyed most of the supplies.

On August 28, 1940, yet another fire broke out at the Asahi Road headquarter turning all remaining stock at the plagued location to ashes and leaving nothing but the reinforced concrete skeleton of the former neoclassical building. In 1941 the Chung Yuen building was almost entirely rebuilt in a modernist architectural style and the original spire was replaced with an even taller structure. Surpassing the Bohai Building, erected in 1936, in height it once more was the tallest building in northern China until the 1970s.

After the liberation of Tianjin in 1949, Chung Yuen Co. became the state-owned “New Zhong Yuan Company” and the shopping mall was renamed “Tianjin Department Store” (天津百货公司). It is under this iconic name, that the store is still mostly remembered today by older citizens of Tianjin.

During the 1976 Tangshan earthquake, which destroyed many of Tianjin’s historic buildings, Tianjin Department Stores tower was toppled once more and replaced with a shorter and sturdier clock tower.

After several more reconstructions and another corporate restructuring in 1988, Shandong Yantai Zhenhua Group (山东烟台振华集团股份有限公司) became the new majority owner in 2010 who continues to operate it to this day.

Renamed again to Zhong Yuan, it now proudly features a logo with the tagline “Since 1926”, referring to its founding date rather than the opening year of its first store – a jab of course at its old competitor the Quanyechang who promotes itself as active “since 1928”. 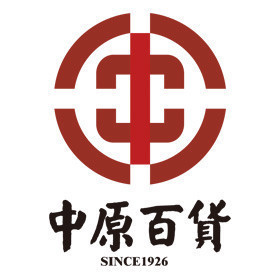 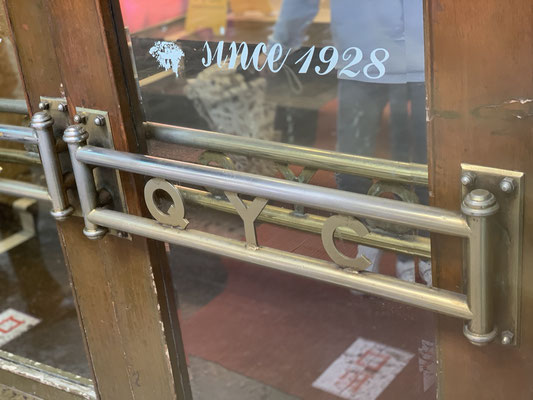