Although neither the first, nor the largest in terms of billings or staff, Carl Crow Inc undoubtedly was the most famous advertising agency of old Shanghai – thanks to its founder, American ad-man, author and adventurer Mr. Carl Crow. his company never employed more than 20 people - three times fewer than the Chinese Commercial Advertising Agency (C.C.A.A.) and six times fewer than its British competitor Millington Ltd. - but it was well known for its family-like company culture and secondly for its Feng Shui (literally translated as wind and water from Chinese) blessed office premises. In Carl Crow's own words from his 1937 seminal book “400 Million Customers”:

While above description refers to its most iconic location on 81 Jinkee Road (today's Dianchi Road), Carl Crow Inc and its predecessor agency actually occupied at least six to seven different offices around the Shanghai International Settlement Central District during their existence from 1918 to 1947. Join us on an urban exploration of all the known addresses and what is left of them today: 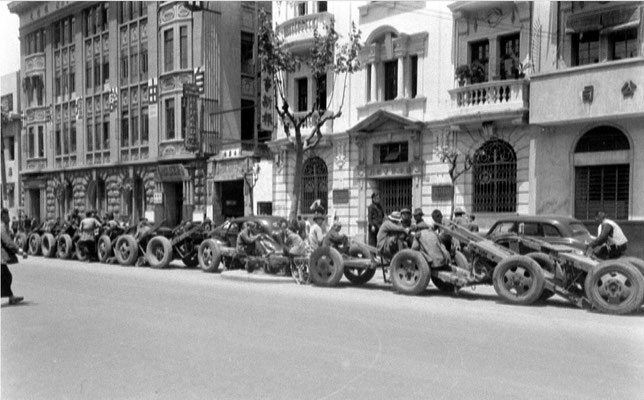 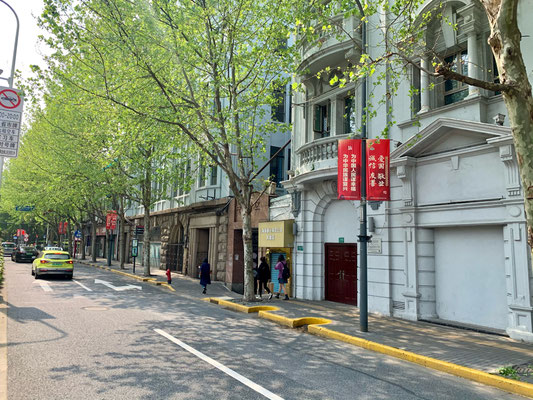 Carl Crow set up the Oriental News Agency, later incorporated and known as Chun Mei News Agency, aka the Chinese-American News Agency (中美通讯社) in the fall of 1918, with the help of Commercial Attaché Julean Arnold and Acting Consul Nelson T. Johnson. The agency’s primary business was to translate U.S. press news articles and disseminate them in China. In other words, it was a propaganda organ for American interests in China under the US “Committee of Public Information” (CPI). Immediately after his appointment in September, Crow opened the Shanghai office of the Committee on Public Information in the premises of the Millard Publishing Company at 113 Avenue Edward VII which later became 160 Av Edward (now Yan’An East Road) when in 1931 the Lee Building was erected and hired two assistants, two translators and several office workers (Matsuo, “American Propaganda in China: The U.S. Committee on Public Information 1918-1919”). Whether or not Carl Crow that year was already engaged in advertising services on the side we do not know. What we do know is that by 1919 Chun Mei had moved out of Millard’s office and to its own bureaus further north in the Central District.

The Building at the location today unfortunately is not the same as in 1918: 113 Av. Edward VII became 160 Av. Edward / later Yan An West Rd. when the Lee Building (Qingfeng Building in Chinese) was constructed there in 1931. Millard Publishing, The Shanghai Herald, The China Press, China Daily Tribune, The China Evening News, etc. remained at the same place until the late 40s. What is left of their former offices nowadays can be seen in gallery below: 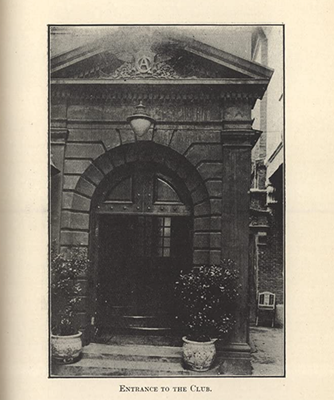 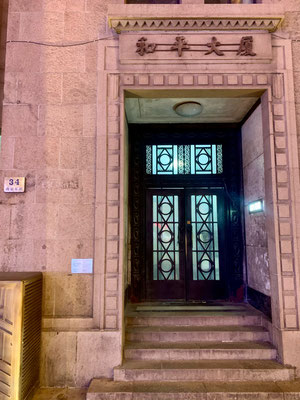 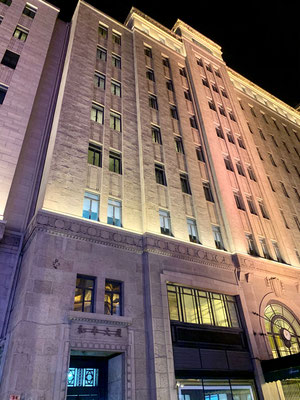 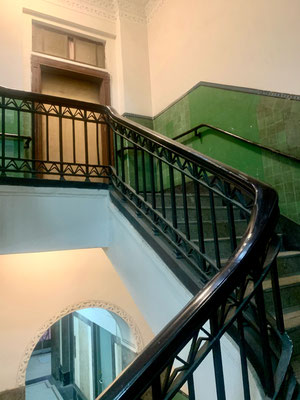 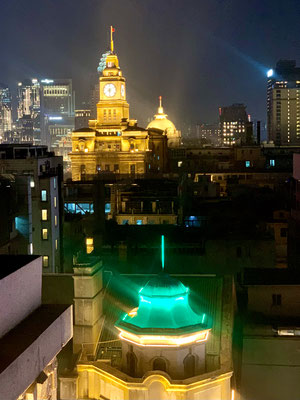 Besides branch offices in Peking and Tientsin, Chun Mei established it’s Shanghai headquarter in early 1919 on 34 Nanking Road. By mid 1919 Carl Crow was however forced to resign from the news agency after being the center of a diplomatic scandal: he had continued to pay himself a salary out of CPI funds even though with the end of World War I the CPI Shanghai offices were closed in April 1919.

Having built up a nation-wide network and mailing list with Chun Mei, Carl Crow lost no time to pivot into advertising under his own name: In 1920 Carl Crow Inc (克劳广告公司) was formally incorporated in Delaware with a registered capital of USD 25,000, Carl Crow as sole proprietor and positioned as “Advertising and Merchandising Service Agents”.

Just like its sister company Chun Mei, the first premises of Carl Crow Inc were registered under the prestigious 34 Nanking Road address, right across the Palace Hotel on the Bund and sharing the building with the American Club (until the latter moved to its own building on Foochow Road designed by László Hudec in 1925).

What caused the young ad agency’s first office relocation away from 34 Nanking Rd. in late 1921 is not known, but most likely related to both the break-up with Chun Mei and plans for the demolition of its building to erect the Sassoon House at the very same location. Designed by architects Palmer and Turner, construction began in 1926, and it was completed in 1929 to house the luxurious Art-Deco Cathay Hotel (now the Peace Hotel).

Again, what remains at the location today is not the same building Carl Crow Inc operated from but is now an annex of the Peace Hotel built in 1929. 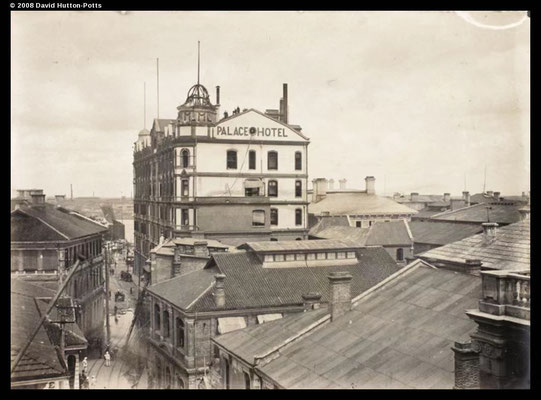 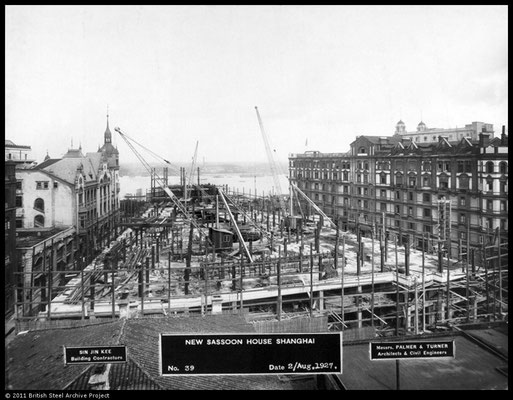 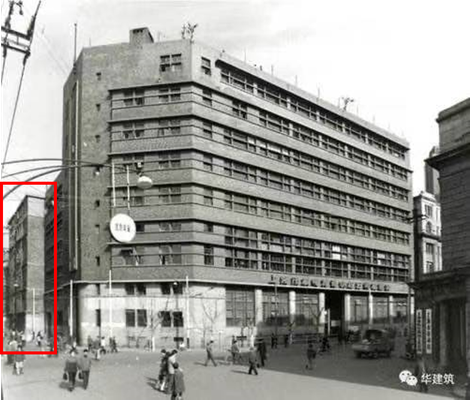 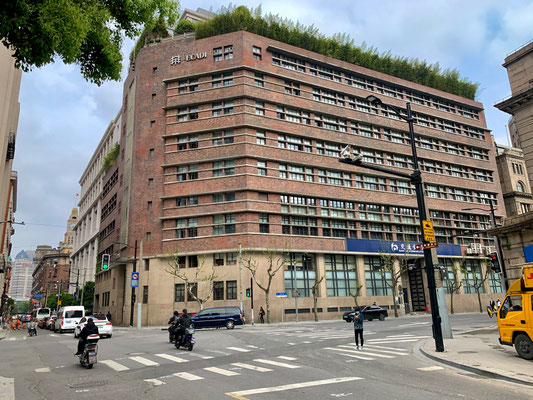 Next stop for Carl Crow Inc was a rather short stint at 9 Hankow Road from late 1921 to early 1922. Maybe it was an early flirtation with Feng Shui that drove Crow to this location: right across at no 7 was the imposing building of the China South & Sea Bank which remains there until today (now 110 Hankou Lu). In the 1930s Hankow Road was renumbered and No 9 was split up in No 115 and No 131 respectively. Little is known of the twin building that occupied the two lots, except its Chinese name 庆云大楼 (Qingyun Building) and that it also housed the Nantao Christian Missionary Institute. Well that and press reports of the time surfaced by Katya Knyazeva: "the building at 9 Hankow Road, was legendary: illicit cock fights (29 arrests had to be made!), illegal gambling, spontaneous conflagrations, dead merchants found in apartments... the news headlines are overwhelming". Not so Feng Shui after all and maybe an explanation why Crow moved on so quickly... 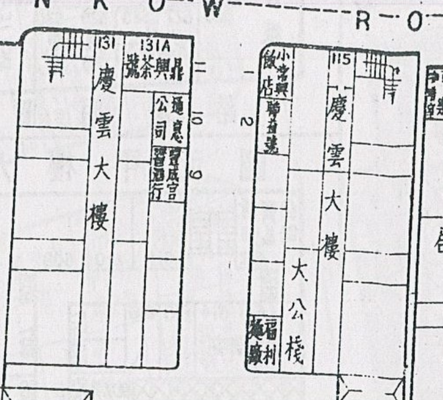 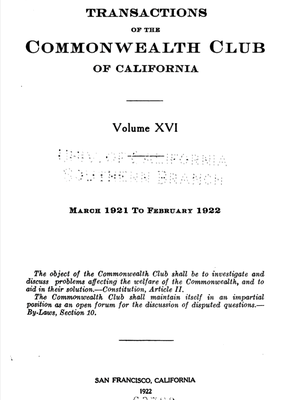 In 2006 Jiushi Commercial Mansion office complex was built at the location and no traces of Crows former premises remain: 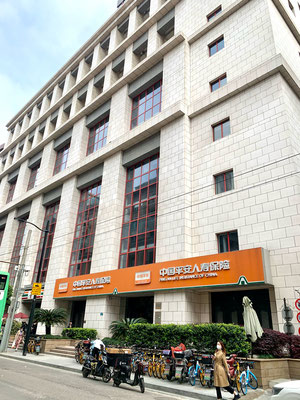 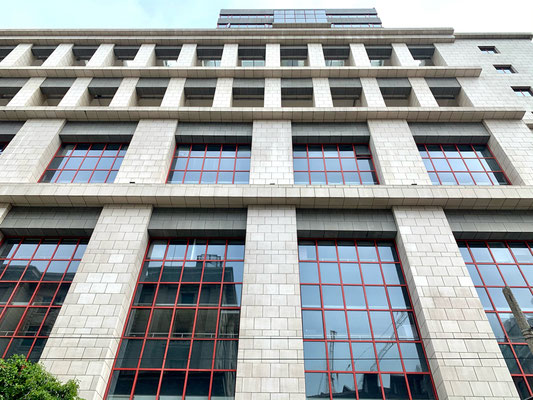 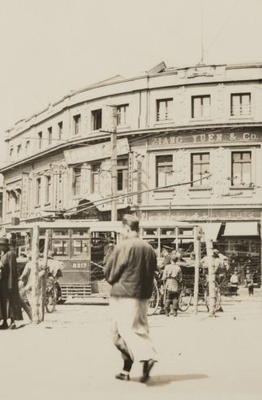 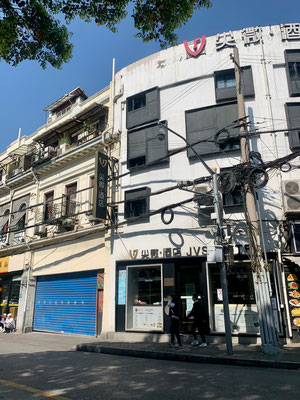 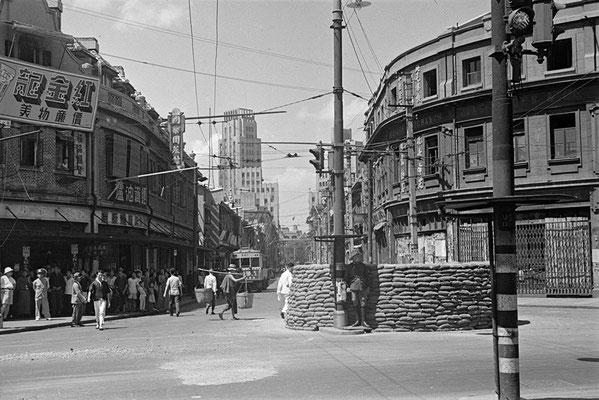 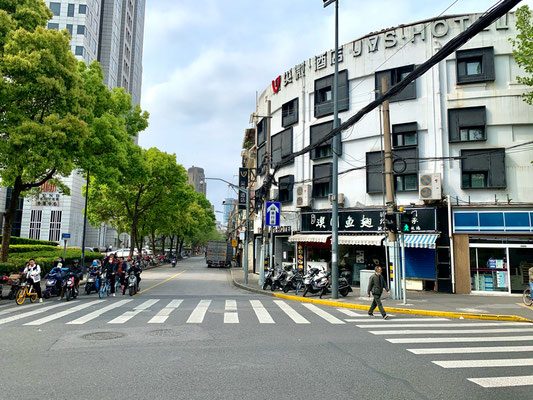 By September 1922 Carl Crow Inc had once more moved its offices to a freshly constructed building on 6B Kiangse Road (B being the second floor). That area at the end of "Ave Eddy" was always known as "Press Alley" or "Fleet Street" due to the high concentration of newspaper and press agency offices. Carl could walk from paper to paper placing ads. (thanks to Paul French for the hint!)

While the location thus was very strategic, just next to the old 113 Av. Edward VII Millard’s China Press offices and one block from the Shanghai Evening Post & Mercury on 21 Av. Edward VII (both of which Carl Crow was involved with), it had none of the glamor nor alleged Feng Shui qualities of the former Nanking or Hankow Road premises. Nonetheless the location turned out to be Carl Crow Inc’s longest lasting office address: the agency resided in the three storey commercial building for about 7 years before it once more moved on to the next stop. The business undoubtedly flourished and counted some of the most well known brands of the time as its clients: Eastman Kodak, Royal Baking Powder, Ford Motor Cars, Sun-Maid Raisins, Cadbury and Pond's Skincare.

One can only speculate that the incident reported as "Carl Crow, Inc., Offices Damaged In Fire Outbreak" by The China Press on 20 Feb 1927 (see below) had something to do with the subsequent relocation. It did at least add the water component of Feng & Shui to the location after all... 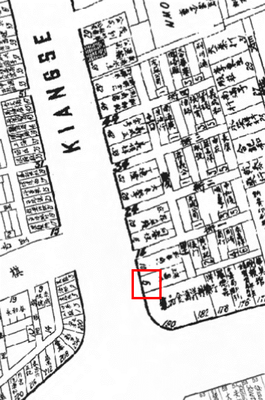 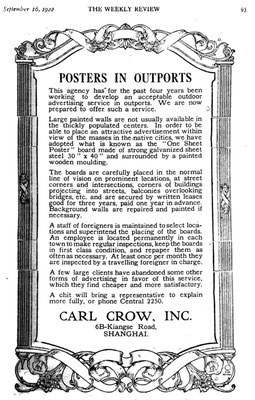 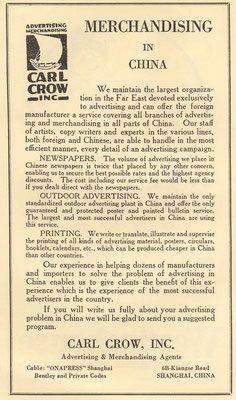 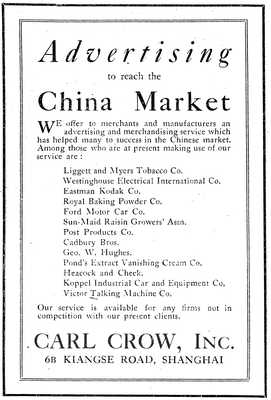 Either way - Almost exactly 100 years after its construction the location still proves to have been a lucky one as despite the fire, war, multiple regime changes and even more urban redevelopment, the building remains intact today, open for exploration and now housing three apartments and a public kitchen on floors A, B and C. Mr Zhang who resides on the second floor (6B), claims to have no knowledge of neither advertising nor geomancy. He unfortunately also wouldn't let us dig through his dwelling in search for Carl Crow artifacts....

While We don’t know exactly why Carl Crow Inc left its long standing Kiangse Rd location and moved to 47 Peking Rd., in terms of Feng Shui it was certainly an upgrade: located inside the classic Abraham Co building, it was located near the Huangpu river, right next to the respected Jardine Matheson "EWO Building" (presumably offering free flow of Old Shanghai's most famous beer brand!) and behind the Yokohama Specie Bank on the Bund. Somehow, though, this location was neither meant to last for long, and after only one year Carl Crow Inc moved one block south, to Jinkee Road, its final street address for the next 17 years.

The Abraham Co. Building today is a luxury shopping mall with the former No. 47 building now integrated with the front part. Situated across the street is the even more luxurious Peninsula Hotel. Very Feng, much Shui! 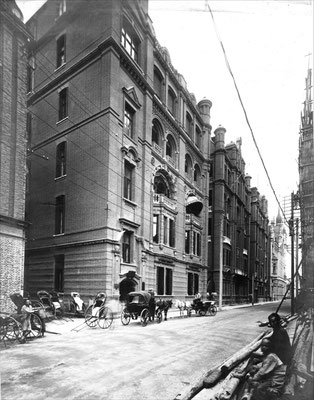 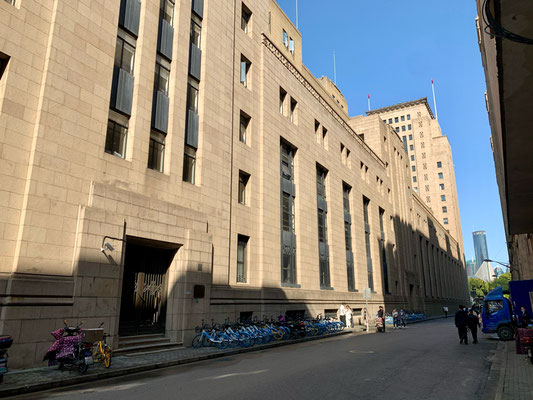 Carl Crow Inc's first stop on the short Jinkee Road between the Bund and Szechuen Road was at No 16: a small building hidden inside a lane right behind the by now completed Sassoon House / Cathay Hotel. Jinkee Rd also was a highly strategic location close to the North China News Daily News building on the Bund - the largest English language newspaper of its time.

But once more plagued by the construction boom of the Shanghai 1920s and 30s, the agency relocated one last time in early 1934: Bank of China purchased the land across on Jinkee Rd. in 1930 and the former German Club Concordia on the intersection of Jinkee and the Bund was demolished in 1935 for the construction of the new Bank of China tower that now spans as far back as Yuenmingyuen Rd.

The former No 16 / 60 building no longer stands and has been replaced with a modern expansion of the Peace Hotel parking garage: 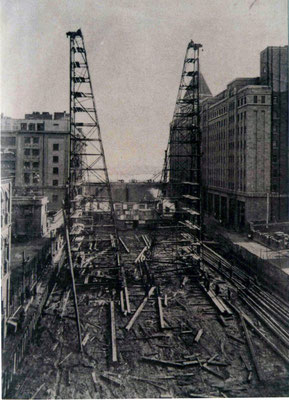 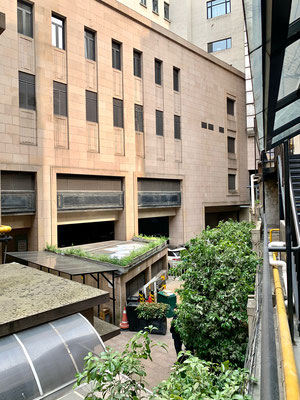 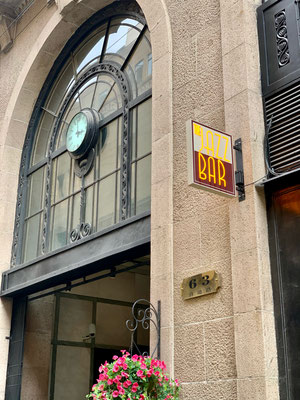 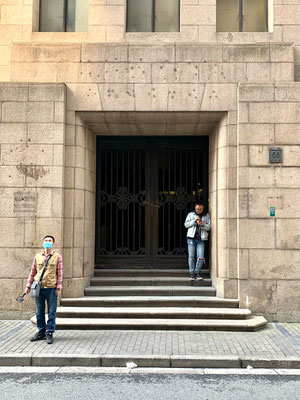 Here is something that almost led us down the proverbial wrong road: On April 14th & 16th 1934 Bank of Shanghai issued a report on the standing of Carl Crow Inc. ,  which is available online at https://madspace.org/Archives/?ID=1119 thanks to Cécile Armand. It mentions that the company’s current address is 81 Jinkee Road (仁记路81号) but states it had relocated there from the previous address of 60 Jinkee Road (仁记路60号). While at first this seems as though the agency had made a stopover at yet another Jinkee Rd. location, the confusion is explained by the fact that because of the Bank of China construction, Jinkee Rd. was renumbered between 1933 and 1934: No 21 became No 81 and No 16 became No 60. This was discovered thanks to Katya Knyazeva, the celebrated guardian angel of the North China Desks Hong Lists at https://avezink.livejournal.com/tag/hong%20lists.

Why a creditor apparently had requested the Shanghai Bank report, remains a mystery but we have to assume the increasing Japanese hostilities also took their toll on the formerly booming ad business: Feng Shui no good! 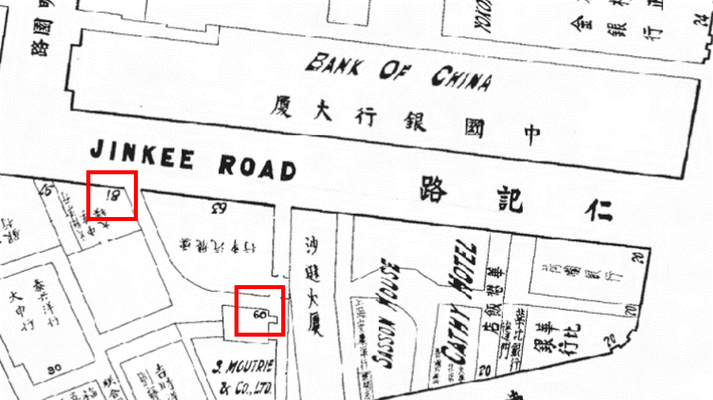 Based on the above report by Shanghai Bank we know that Carl Crow Inc must have relocated to 81 Jinkee Road in early 1934. On the 4th floor of the Kungping Building it found its final office address.

In a rather unexpected turn of events Carl Crow fled Shanghai in August 1937, after his office was badly damaged by the accidental bombing on nearby Nanking Rd during the battle of Shanghai. Known for his articulate anti-Japanese and pro-American position, he had reasons to fear repercussions from the imminent Japanese invasion. So Carl Crow personally ended up working only around 3.5 years at his praised Feng Shui offices. Based on Paul Frenchs excellent biography he apparently managed to remotely sell the business in 1941. Sadly, Carl Crow died in New York in 1945 at age 61 and never managed to return to Shanghai after the end of the war. Crow Carl (China) Inc though outlived him by 2 years and was still listed in the 1947 Shanghai Telephone Directory on 81 Tienchih (Jinkee) Rd. before it vanished from the traces of history.

While the last offices of Carl Crow Inc. certainly did not bring luck to its owner, the building as such survived to this day and the 4th floor is now occupied by the property management company. after a renovation in 1999 it was completely stripped inside but continues to radiate a solid Feng Shui vibe housing not only a Traditional Chinese Medicine (TCM) clinic , a mother and child care center but also its own BOC bank branch office: long life, wealth and prosperity achieved at last.

Many thanks to Cécile Armand, Katya Knyazeva and Paul French for their extensive prior work on Carl Crow and additional contributions to this article.

We are located in the FORMER Shanghai International Settlement just south of Soochow Creek on the corner of Seymour Road and Robinson Road.