"Once upon a time, on a fair and wondrous day, the brave King of the Franks did journey to the fabled land of Cathay. Resplendent in his ermine-trimmed robes, he arrived at the Imperial Palace in the celestial city of Beijing. There, he was greeted with the utmost reverence by the Son of Heaven, the august Emperor of China, who was attired in his finest silks and adorned with glittering jewels. When the two monarchs took their seats of honor, a hush fell over the court, for all knew that this was a momentous occasion - the first time that the lords of these two great realms had ever met.

As they conversed and the tales of their lands and peoples flowed back and forth, one could sense the bonds of friendship and mutual respect being forged between these two mighty rulers, symbolizing the growing unity and understanding between the peoples of the East and the West. And when the Frankish King did take his leave, the noble people of the Middle Kingdom were so impressed with his visit that they vowed to forevermore purchase the fine wares of Farbwerke vorm. Meister Lucius & Brüning AG, lavishing the company's owners with gold and making them famous throughout the land. And they lived happily ever after. The End."

You’ve realized by now that the scene depicted on our Chinese tin advertising for scarlet dyestuff from the Farbwerke vorm. Meister Lucius & Brüning AG might be slightly fictionalized... In fact, it is entirely imagined and enormously anachronistic. The rulers of the Frankish empire, which flourished from 481-843 AD, and the Qing dynasty, reigning from 1636-1912, could in reality never have met. So, is there a deeper explanation for this curious key visual? Let’s investigate:

The Farbwerke vormals Meister Lucius & Brüning (later renamed to Höchst AG), was one of the three largest chemical and pharma companies in Germany. It was founded in 1863 in Höchst, near the city of Frankfurt - named after the Germanic tribe of the Franks, out of which the Frankish Empire emerged. The enterprise early-on started to export to China and its pigments & dyestuffs proved to be particularly popular there to color textiles for traditional Chinese garments. On the right side of the advertisement, we find its (poorly translated…) Chinese company name Fǎpǔwéiěrkēng (法普唯耳坑).

Its distributor in China was the German firm Justus Lembke Co., founded in 1852, and its Hong (trading firm) name “Hym-sun” (谦信洋行) is written on the left of the advertisement. After its owner passed, the English name was changed to China Export, Import & Bank Company AG, but it retained its Chinese name. In 1907 the company built new offices on Kiangse Road in Shanghai, designed by architectural firm Becker & Baedecker. The building still stands today at No. 138 Jiangxi Middle Road, although its English name is wrongly attributed to the China Import and Export Lumber Company Ltd. (祥泰木行公司).

In 1916, Hoechst AG was one of the co-founders of I.G. Farben, a special interest group of Germany's chemical industry during and after WWI. In 1925, I.G. Farben became a conglomerate and with that the largest chemical and pharmaceutical company in the world, later described as “Germanys most notorious industrial concern during the Third Reich”. In China I.G. Farben marketed itself as 大德颜料厂 - "Big German Dye Factory” and enjoyed tremendous success. So much so that in 1927 it terminated the long-standing contract with “Hym-sun” and other distributors and instead founded its own Chinese trading company, Defag (德孚洋行). 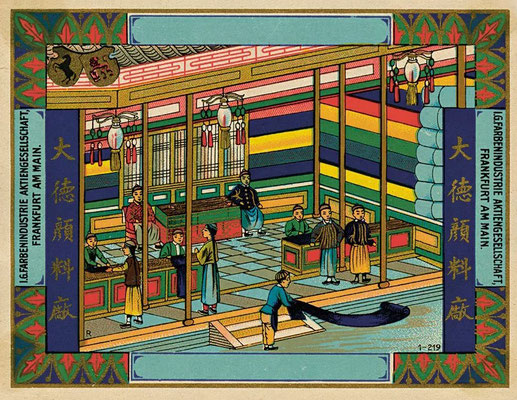 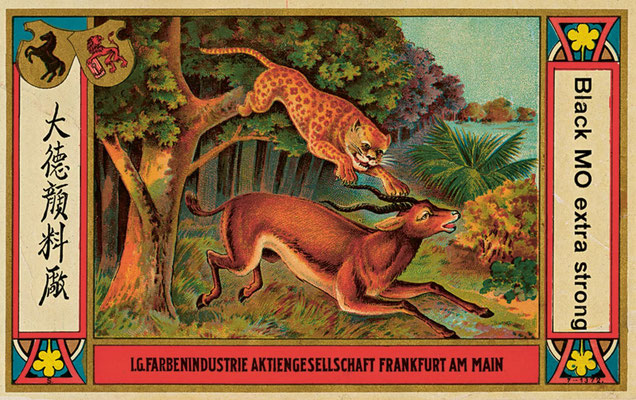 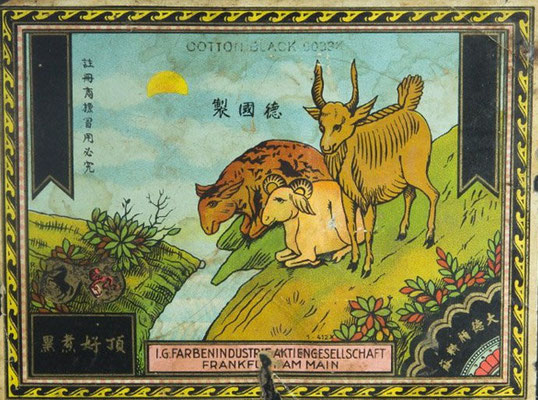 A significant part of I.G. Farben and its predecessor’s success in China can be attributed to their brilliantly colored labels and advertising posters. The designers of the colorful graphics let their imaginations run wild, depicting a wide range of real world as well as fantastical scenes. We have to remember that during Qing Dynasty and Republican China literacy rate was only approx. 15% and so customers, most of whom were not able to read Chinese characters, could recognize their preferred product with the help of memorable colors, symbols and motifs.

Considering this, our imaginary “meeting of kings” scene appears much less ridiculous, than we made it appear in our introduction. In fact, the opposite is the case and it proves how the power of advertising can transport us to other worlds – or times, conjuring up images and narratives that resonate with our dreams, desires and aspirations. Through the use of words and images, advertisers tap into the collective unconscious, evoking emotions and memories that ultimately drive us to take action. A reminder of the enduring power of storytelling and the boundless potential of the human imagination!

All that being said, reality soon caught up with I.G. Farben, when Germany attacked the Soviet Union in June 1941 and all shipments of German chemical products to China were ended. After the defeat of Germany, I.G. Farben was dissolved in July 1945, marking also the end of its fairytale story in China. That is until Höchst AG returned to China in the 1990s, but that’s another story for another time…

P.S. The characters visible on top of the advertisement, 华堂祝嘏, 谦信洋行, 同享遐龄, could be translated as “We send our greetings to your house and wishes of a happy birthday to the emperor. Justus Lembke Co. Let us both enjoy long life until the old age”. But it could also be interpreted as just "The Chinese branch of Justus Lembke Co., whishes to share a good time!"

Either way, the scene probably shows the the Guangxu Emperor (光緒帝), who reigned from 25 February 1875 to 14 November 1908. The Chinese ruler depicted looks similar to one of his official portraits. Born in August 1871, the motif could have been commemorative of his 20th birthday in 1891 or his 30th birthday in 1901. In late 1897 the German Empire occupied Jiaozhou Bay. After 1898 the emperor was effectively removed from power (despite keeping the title) and kept under house arrest. The Boxer Rebellion started in 1899. So, most likely the illustration can be dated to before 1897- probably to 1891.

If you have a different interpretation or insights, please do let us know!